The event was a celebration of reaching several milestones since the CSPDC took over the administration of the BRITE Bus Transit System several years ago. BRITE Bus provides fixed-route and on-demand transportation in the Staunton, Augusta County, and Waynesboro (SAW) area. Services are administered by the CSPDC, with operational recommendations provided by the BRITE Transit Advisory Committee (BTAC). 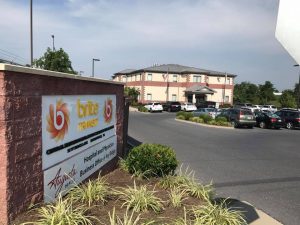 In addition to taking ownership of the transit operations facility in Fishersville and placing a new fleet of nine silver buses and one new trolley into service, a contract was awarded for transit service provisions to Virginia Regional Transit. BRITE has also initiated a new social media presence in addition to the information available at  www.BRITEbus.org. Transit users can visit @BRITEbus on Facebook and Twitter for updates on routes and real-time service announcements, or for general information or customer service inquiries.

These changes are the culmination of a multi-year effort to study, plan, and execute transit improvements in the SAW area. The process began with the development and adoption of the Transit Development Plan (TDP) in 2015. The TDP is a short-range plan that outlines the transit improvements intended during a six-year planning horizon; estimates what resources will be needed; and identifies potential funding options. The development of the CSPDC’s TDP was guided by a working group made up of representatives from Staunton, Waynesboro and Augusta County, along with public and private transit partners.  Additionally, significant input to the TDP was sought through rider surveys and stakeholder interviews. 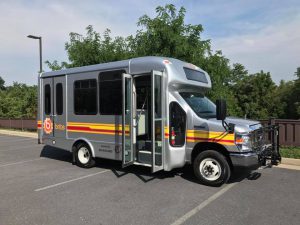 A primary focus of the projects included in the TDP has been the development of a combined urban-rural system that ties together services operating in the region. To lay the foundation for future growth, the program has accomplished several projects leading up to the facility transfer and new fleet. Between 2015 and 2017, a unified brand called BRITE was launched; the BTAC was formed; transit funding was consolidated under the CSPDC; route improvements were implemented; and transit system bus stops, shelters, and signage have been upgraded. Following a competitive bidding process, the CSPDC published notice in March 2017 to enter into contract with Virginia Regional Transit as the transit provider for the BRITE system. The resulting contract for an initial five-year period began July 1, 2017.